A few years ago, Benjamin and Kelly Williamson were living a relatively comfortable life in West Deptford, NJ with their four children. It wasn't until Benjamin had to resign from his job at a refinery, that their life would be turned upside down.

With a mortgage, car payment and a multitude of other expenses, Benjamin's unemployment compensation depleted quickly. Left without any source of income, Benjamin, Kelly and their four young children were forced to leave their home and stay with relatives. Things only went from bad to worse, when the family members they were living with began mistreating their children. To protect their children, the Williamson's had no choice, but to call a homeless hotline.

"We literally had no where to go," said Benjamin, "nobody wanted to help us."

Desperate to find a safe haven, the family reached out to social services in an effort to find temporary residency. Fortunately, social services found a place for them at our family shelter, Eleanor Corbett House.

"It's a lot harder for a family of six," Kelly explained, "and even harder with a child who has special needs."

One of the couple's four children, eight-year-old Paul has autism, and has a hard time adjusting to the change and the uncertainty of being homeless. Their other children, ten-year-old Jared, three-year-old Brynn and one-year-old Josh also have trouble understanding that as of right now they have no place to call home.

"Brynn thinks she lives at daycare, because there are other children here," said Kelly, "she calls them her brothers and sisters, because they live with her."

Times may be hard for this family of six, but they are grateful to Volunteers of America Delaware Valley and the Eleanor Corbett House staff for being courteous and professional.

"The staff here is very informative and kind," said Benjamin, "We are so thankful that Volunteers of America was able to provide us with a roof over our heads, food and a safe place for the children."

The couple hopes to soon become stable and find a home for their family. 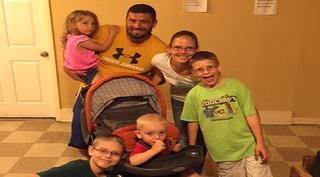