Get To Know Who You're Helping

She walked into the room slowly, balancing herself with a cane. She wasn’t at all frail but certainly the strength you could see was once there was waning under the weight of stress of the situation she was in now. She wanted to tell her story because, as strange as it may seem to some, she was proud; proud that she got this far, proud that she could finally see hope and proud that she hasn’t given up.

Deborah Ashworth is 61 years old and has spent two weeks at our Eleanor Corbett program. She had spent the last 15 years at the same job at McDonalds before health issues, and her employer, forced her to go on disability. The problem: disability wasn’t kicking in right away and with no income she was forced out of the room she rented with Medicaid being her only lifeline. Without the assistance of Volunteers of America Delaware Valley, she acknowledges that she “would have been out on the street.”

Deborah admits she made mistakes in her younger years which led to very strained relationships with her family, but she says she hasn’t been that person in a long time. She credits her change with allowing her to get through this time now and contends she wouldn’t have had the strength or willingness in her previous life.

“I don’t want people to think that shelters are for drunks and bums, this place isn’t that way.The staff is very nice and very polite and I am really impressed.” Although, Deborah does admit she was scared the first night at Eleanor Corbett and feared that she would be introduced to the stereotype of shelters she had in her head. She also acknowledges that she was lonely and missed her friends and customers from work but she “feels like there’s more hope for me now.”

For now, she is waiting on her disability with the goal of getting her own apartment and says this experience has changed her, “I will never ever say a harsh word about someone being homeless.” And for those entering the same situation she is in, her advice is to be patient, “you’ll see that there is hope.”

She also wants donors to know that their donations make a huge difference. She specifically mentions the snacks and shoes that were given to her when she first got to Eleanor Corbett.“Whatever you donate it is a tremendous help.”

“One of my friends actually told me that she was proud of me for getting through this.I’m just happy I got the help that I need.” 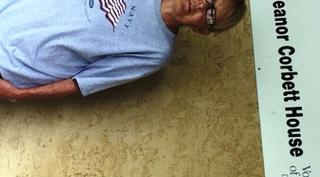 More Clients You Are Helping
The Williams Family